London and the south-east registered strongest gains in 2013, with prices lifting by 9.1% and 5% respectively, analyst says

According to analyst at Hometrack and the recent Guardian Article here, While 75% of postcodes registered price gains over the year, 15% saw prices edge down and 10% were unchanged.

House prices in three-quarters of postcodes across England and Wales ended the year higher than they were at the start, the property analyst Hometrack has found. 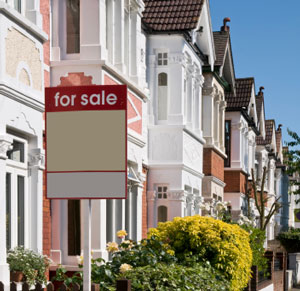 The momentum built up in the market this year will spill into 2014 as demand from buyers continues to rise amid a lack of homes on the market, Hometrack predicts, with the strongest price inflation still focused on southern England.

On average, house prices grew by 4.4% during 2013 as the housing market revival took hold, following a 0.3% drop during 2012. Prices increased by 0.5% month-on-month across England and Wales in December, marking the 11th consecutive month of rises.

London and the south-east registered the strongest gains across 2013, with prices lifting by 9.1% and 5% respectively while prices in the north fell by 0.5% over 2013. In London, the typical percentage of the asking price achieved has now reached an all-time high in the 12-year history of the survey at 98.1%, compared with a national average of 95.4%.

While 75% of postcodes registered price gains over the year, 15% saw prices edge down and 10% were unchanged. This marks a sharp turnaround compared with 2012, when just 20% of postcodes recorded price increases. 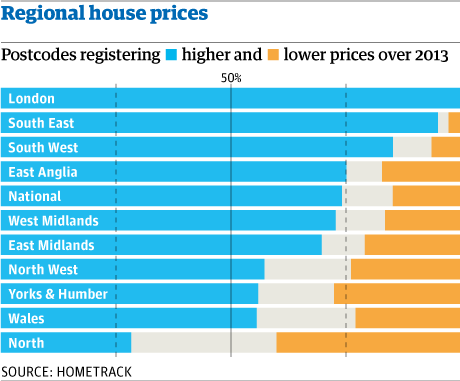 Demand from buyers registering with estate agents dropped off for the first time in 11 months in December as the seasonal slowdown kicked in.

But Hometrack said that across the past year, there has been a 25% overall increase in buyer demand, marking the strongest growth seen in three years.

Meanwhile, the growth in the supply of homes for sale over the year lagged behind at 6%, marking the lowest level recorded since the survey began in 2001.

A string of government schemes such as Help to Buy, which gives people with deposits as low as 5% a helping hand on to or up the property ladder, have been launched to increase mortgage availability.

But critics say that levels of house building are not strong enough to keep up with the rising home buyer demand that these schemes have prompted. Burgeoning buyer demand coupled with a lack of supply is putting an upward pressure on house prices, they argue.Richard Donnell, director of research at Hometrack, said that London and the south-east – the regions with the biggest price increases – are also the areas with the greatest imbalances between demand and supply.

He believes the impact of Help to Buy on the housing market will fall short of expectations due to affordability constraints on buyers.

He added: “What is less clear is the scale of additional pent-up demand ready to feed into the market in 2014 and the sensitivity of buyers to further price rises.

“Overall we expect the momentum in house price growth to spill over into 2014 supported by a continued lack of supply and rising demand.

“The strongest market conditions and impetus for price inflation is set to remain focused on southern England in 2014. A broader based recovery in the housing market is dependent upon growth in the real economy, jobs and household incomes.”

The survey regularly asks estate agents in postcodes across England and Wales about achievable selling prices.